Thousands of Homes Planned for Brisbane 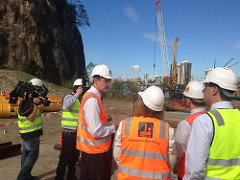 Brisbane ratepayers have just received a mail out from Graham Quirk, the Brisbane lord mayor, informing them that the State Government has set Brisbane City Council a target of approving more than 223,000 new homes over the next 30 years to keep up with the city’s population growth. That’s over 7,500 homes a year.  Bill Shorten opposition labor leader and his caucus went to the last election with a mandate that they want to restrict negative gearing and abolish tax depreciation on older residential homes. In 1985 tax depreciation was introduced on residential properties to stimulate the economy by increasing investment and construction of rental accommodation.

Property investors are allowed to depreciate the building cost against any income that is generated over a 40 year period from time of construction, white goods, window and floor covering, air conditioners and hot water systems are also allowed to be depreciated over a shorter period of time.