Gold Coast property investment has continued to be strong in 2016 against all predictions, with the aid of the looming Commonwealth Games, the Gold Coast property market is showing no signs of slowing with house prices in some suburbs jumping more than 30 per cent in the past year.

2. If you own a house in Mermaid Beach, Broadbeach Waters, Springbrook or Tweed Heads you could be sitting on gold, with property prices surging in those suburbs.

Mermaid Beach was the biggest mover, soaring 33.5 per cent over 12 months with a median house price now $1.395 million. It was followed by Broadbeach Waters on 24.8 per cent and Springbrook on 20.4 per cent.

There is an industry predicted the Gold Coast market will continue to surge in 2017 with a lot of investors securing properties now because they know after the Commonwealth Games there’s going to be substantial growth. 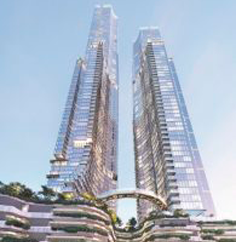 THE Southern Hemisphere’s tallest building is set to tower over Surfers Paradise at an astonishing 103 storeys. The proposed $1.2 billion Orion Towers would reach up 328m and is planned for a Surfers Paradise Boulevard site between Enderley and Markwell avenues.

The 78-storey Q1 will fall in the shadow of the proposed Orion Towers.If built, Orion Towers will become the Southern Hemisphere’s tallest building.

Development manager Chris Alston said it was hoped the project, if realised, would be become a major centre of the Gold Coast, as the city continues its development boom. He said it would inject more than $540 million into the Coast’s economy, create around 1300 jobs during construction and a further 450 direct, and indirect jobs, once completed.

The proposed site, bordering the light rail, is occupied by a 1960s-era two-level motel and a handful of ageing low-rise buildings, according to documents filed with the council.Call the Property Returns Gold Coast office to discuss your property related tax depreciation benefits today.